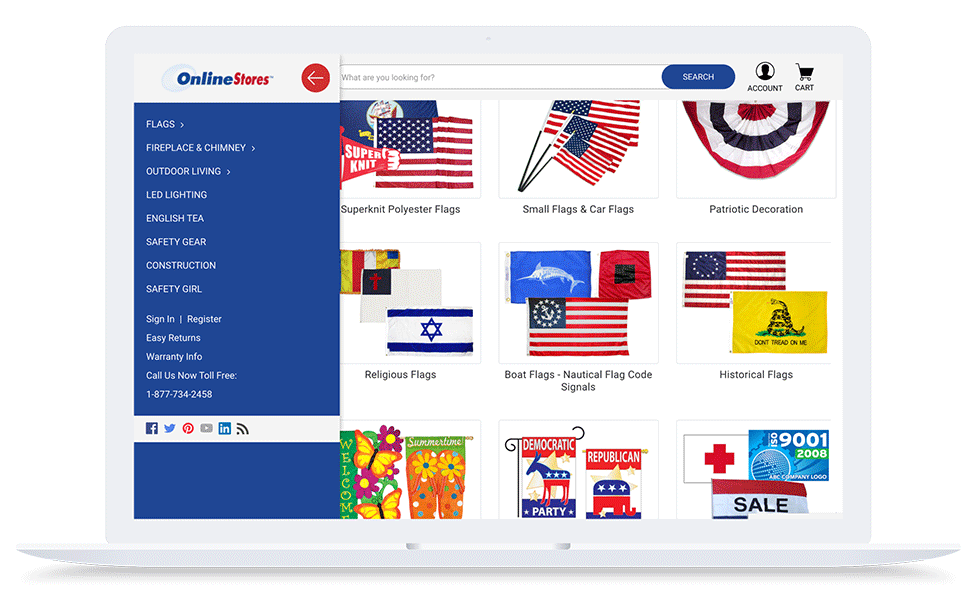 It Started with a Flag

Anyone who has launched an online store knows that it’s no simple feat. Now, imagine launching eight stores in the span of five months during a global pandemic. It’s exactly what Online Stores did. But, getting things done and making things happen during times of testing is the fabric that Online Stores is cut from.

Following the 9-11 attacks in 2001, the nation experienced a shortage of American flags. At the time, Kevin Hickey was doing SEO work for a company that had the flag. However, customer demand kept crashing the company’s website. Finally, the company’s owner asked Kevin to pull the flag from the site.

Kevin did remove it, but he added finding a supply that would meet the country’s demand to his list of top priorities. He found suppliers, launched a website and began selling flags online.

Today, Kevin is the CEO of Online Stores, the parent company to a diverse family of stores that includes:

Collectively, the eight stores that make up Online Stores carry over 40,000 products and serve more than 400,000 customers a year.

After the launch of the first online store, others soon came along. For instance, Kevin is from England and he could never find a good cup of tea. So he began importing teas, candies, cookies and the like from England that he believed other British people living in America would enjoy as well.

We also started discountsafetygear.com, a store that sells personal protective equipment and safety equipment for workers such as safety glasses, face masks, face shields, etc. And as time went on we just acquired more websites. Some of them succeeded and some of them flopped, but today we’re eight online stores strong.

The interesting thing is that we launched our stores on BigCommerce right in the middle of the COVID-19 pandemic. When it hit, discountsafetygear.com was actually considered an essential business because we were supplying personal protective equipment to individuals and companies. So our traffic really increased on that site to the point we had to go to two shifts just to get all the orders out.

BigCommerce handled it like a champ. We didn't have any problems with slow traffic or order volume, and received no complaints about technical issues on the website. Having a better website allowed all the customers flooding our site to place their orders and we didn't lose any sales because of that. I’m not so certain that would have been the case with our previous platform.

“Having a better website allowed all the customers flooding our site to place their orders and we didn't lose any sales because of that. I’m not so certain that would have been the case with our previous platform.”Crystal Rhome, Online Stores, Director of Technology

We were on Magento 1 prior to BigCommerce. When the company announced it was ending support for the platform we knew it would cause us to lose our PCI compliance. This was the catalyst that prompted us to start searching for a new solution.

Honestly, we were glad to be looking for a new platform because we found Magento to be labour-intensive to maintain. It took weeks, if not months, to install an update and make sure it would work with all the customisations and extensions we had. We did a lot of testing and a lot of fixing to make things work with the release. Even after we went live we still dealt with problems.

We would experience site outages on a pretty regular basis. Any change made on one site would lock up the system and take the entire site down and even another site connected to the account.

Every time we would do a new customisation, an integration or add new products to a website, it would slow down the page load time. Sometimes it would take 30 seconds for a page to load. We had to keep increasing the size of the server or remove products from stores to try and keep the system from bogging down.

It was like a house of cards. We’d get things running, but we had to be very, very careful about everything we did to make sure one little thing didn't go wrong that would just take everything down. But the writing was on the wall. We had outgrown the platform and were more than ready for a move.

Take it Out for a Test Drive

I started researching ecommerce platforms back in 2017, because we knew at that point we needed to do something. I had just read an article comparing platforms at the enterprise level, and BigCommerce was in the article. So I just went on the site to take a look at it, like I did with a few others. I connected with Rachel in Sales, and we opened a discussion back in 2017 talking about the platform.

We did look at other platforms such as Magento 2, Shopify Plus, Kibo Commerce, Mozu, Workarea and Salesforce. But, it was BigCommerce that gave us the keys and said, “Here, take it for a drive and see if you like it.” We were able to put it through the paces and try to do what we needed to do to see if the platform would work for us.

We did that with a couple other platforms, but it just didn't work out so well. The support wasn't there, the help wasn't there that we needed to really evaluate it. But Andrew, a Sales Engineer, opened BigCommerce up for us like, “Here, you want an environment? Here, I'll spin one up for you.” We just were able to do what we needed to do to evaluate the platform.

The Joy of Finding What You Want

Because we didn't have a long implementation time before support would end on Magento, it was imperative for our new platform to be quick, easy to learn, and enhance the customer experience.

Our developers needed to be able to get into the system, learn how to configure and develop, and easily turn out results. Our customer service and merchandising teams wanted the new platform to be quick and easy for them to learn and use as well. The customer experience team wanted something that was going to be user-friendly to the customer, deliver quick page load speeds and enhance the team’s ability to market more effectively.

In addition, we love that everything in the back-end comes together. So in our NetSuite system, every order downloads into the NetSuite system and is picked and shipped from the same warehouse or the same set of three warehouses. With BigCommerce we found the functionality, customisability, performance, and support we were looking for. It gives us the ability to do everything we did before and then some.

“Unlike our previous platform, we wanted an easy-to-use API that had full level of functionality so we could write our own integration. We got that with BigCommerce.”Crystal Rhome, Online Stores, Director of Technology

“With BigCommerce we found the functionality, customisability, performance, and support we were looking for. It gives us the ability to do everything we did before and then some.”Crystal Rhome, Online Stores, Director of Technology

Getting Some Help Along the Way

Ericka was our Implementation Project Manager. We couldn't have done this without her. She helped us understand what this entire process entailed from start to finish, and what we needed to do in the correct order to achieve setting up these sites. Once we got through that first site with her, I was able to take her template and use it to go live on all the other stores pretty quickly.

I don't think we would have had a successful launch without having an Implementation Project Manager like Ericka. Having her on our side was what led us to be successful with all eight launches.

In past implementations we discovered there was so much work to do it just paralyzed us. What do I do first? And then you just don't do anything because you don't know what to do. And then you just miss all these little things, and you don't notice them until you're live and then someone complains, “Hey, this was missing. Hey, this isn't working.”

So to have her there right from the start saying, “Okay, here's the order that we're going to do it, here's the timeline that each thing should take, and here's a complete list of everything that past customers have come across that you want to make sure you address as well,” was invaluable.

We also had a Solutions Architect who helped us when we got stuck on a couple of the larger integrations. Specifically, we were trying to integrate Kount’s payment fraud measuring tool and weren't able to do it without the help of Rajib, our BigCommerce Solutions Architect.

Having a better website is going to help us be successful in the marketplace. Being that it is more functional and quicker is going to make sure we get more traffic and a higher conversion rate.Crystal Rhome, Online Stores, Director of Technology 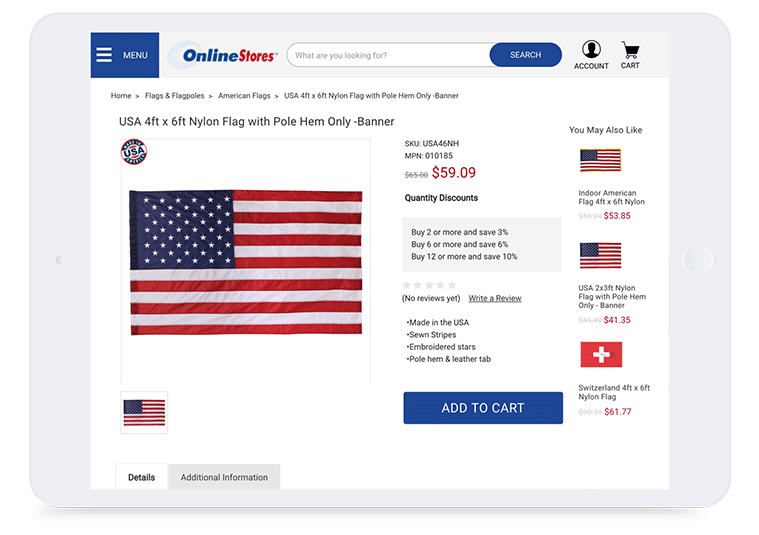 An Exciting Future Ahead

Having a better website is going to help us be successful in the marketplace. Being that it is more functional and quicker is going to make sure we get more traffic and a higher conversion rate.

Going forward, we'd love to see a very big increase in sales. We think we can really grow our business with the website being faster and easier for customers to use, so our goal year over year is usually a 10% growth. I would love to see it be beyond that 10% growth.

As we were developing and moving the sites to BigCommerce, it was pretty interesting to see how BigCommerce rolled out updates to the platform and new things being made available to us. One of the coolest things was seeing Page Builder released. It was like, “Oh, this is cool. Look at this new thing that's here.” So it's neat to see where things are going to go. BigCommerce was the right choice for us.